International expansion in London, Dubai and beyond

The vegan Shake Shack has arrived.

By CHLOE, the New York City-based fast-casual vegan restaurant that opened in 2015 with a similar service model to Danny Meyer’s hit burger chain, recently received $31 million in funding from Bain Capital, Kitchen Fund, Collaborative Fund, TGP International/Qoot International, and other strategic investors to expand to 20 locations in the US and internationally, Moneyish has exclusively learned.

“The goal from day one was to bring vegan food to the masses and make it as accessible and as fun as possible,” by CHLOE co-founder and creative director Samantha Wasser, 30, tells Moneyish.

The brand launched in the West Village and currently has a total of 10 restaurants seeded throughout New York City, Boston, Los Angeles and Providence, R.I., and just opened its first international location in London last February. The global expansion will continue throughout Europe and the Middle East, with more stores planned for London and Dubai. The by CHLOE team has also introduced brunch at all locations, and breakfast items like scrambled tofu with spicy seitan chorizo, black bean salsa and avocado at select New York City outposts. 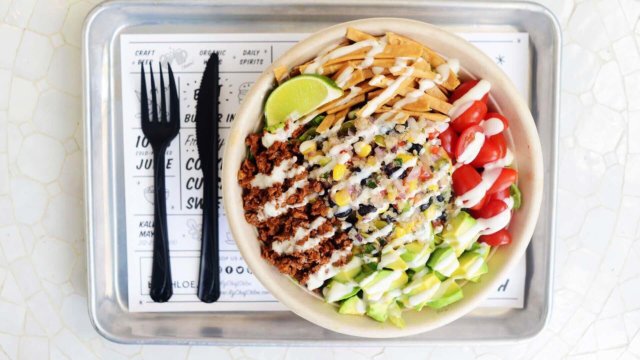 The eatery has followed through on its initial goal of showing diners — particularly meateaters — that vegan food can look and taste great. By CHLOE is known for its plant-based dishes with meatless takes on burgers (tempeh-lentil-chia-walnut patties) and barbecue (smoked portobello mushrooms and seitan in a bourbon barbecue sauce), along with salads, pastas, juices and desserts. Prices are comparable to Shake Shack with meals ranging from $4.95 to $10.95.

Wasser, the daughter of ESquared Hospitality restaurant group CEO James Haber (owner of BLT Steak), co-founded the restaurant with award-winning vegan chef Chloe Coscarelli, who in 2016, filed a lawsuit against Wasser and her father regarding a dispute over the terms of their partnership. She has since severed ties with the brand, however, the duo are among the first to open a fast casual vegan chain, tapping into an underserved $2.22 billion vegan market in the US. About 7.3 million U.S. adults follow a vegetarian-based diet, according to a Vegetarian Times study, and approximately 1 million of them are vegan. But Wasser says you certainly don’t have to be one to enjoy hearty bites like her pesto meatball sandwich: portobello and veggie balls topped with marinara, sweet peppers, basil pesto and cashew mozzarella.

Like Shake Shack, eaters order up at a counter and are summoned when the food is ready, but the ambiance is more living room than fast food joint. Menu items like kelp noodle salads and a sweet potato-cashew rendition of mac n’ cheese are served in bright, airy spaces adorned with geometric print wallpaper, communal tables topped with succulents, as well as rainbow-striped banquette seating and basket chair swings for lounging and people watching by the windowsill.

“It’s not designed like a typical healthy restaurant. I didn’t want earth tones.. I wanted bright poppy and colorful spaces,” says Wasser, which has been part of her strategy to welcome all food lovers — especially millennials like herself — rather than shoving a vegan lifestyle down anyone’s throats.

In fact, she designs her restaurants with online influencers in mind, since social media has been a tool to grow her business. The eateries are decorated with Instagram-friendly neon signs, and she prints kitschy phrases like “Kale me maybe” on her business cards, and “fresh and clean” on her napkins. And it’s working, as by CHLOE has built a cult-like foodie following with 104K Instagram followers (Shake Shack has 451K). And to further engage with customers, the chain has its own blog, eatbychloe.com, which features recipes for black bean beet sliders and sweet potato enchiladas, or Q&As with health and wellness gurus, like a Rumble Boxing coach.

“Millennials are looking for that fun experience when they’re out, and want to document it,” she says. “And I think that people want to follow us because we created a lifestyle brand that isn’t just about our food.”

While by CHLOE’s dishes would be right at home on any full-service restaurant menu, Wasser is savvy about serving what customers her age crave: good, quality food — fast. And the numbers show that fast casual is the future of restaurant models, as quick-service restaurant sales were expected to hit $234 billion in 2017, a 5.3% gain over 2016, according to the National Restaurant Association.

“When we were first talking about the concept, our CEO was like, ‘I don’t understand how you can be successful; there’s not that many vegans in the world,” says Wasser. “But we don’t go out there and target (only) vegans. We created a brand that speaks to everyone, and isn’t intimidating.”