James Beard Award-winning Pastry Chef, Dominique Ansel has shaken up the pastry world with innovation and creativity at the heart of his work.

He is the Chef/Owner of eponymous bakeries in New York, London and Los Angeles, alongside a restaurant in Los Angeles, and has been responsible for creating some of the most fêted pastries in the world, including: the Cronut® (named one of TIME Magazine’s “25 Best inventions of 2013”), Cookie Shot, Frozen S’more, Blossoming Hot Chocolate, What-A-Melon Soft Serve and many more.

For his prolific creativity, he was named the World’s Best Pastry Chef in 2017 by the World’s 50 Best Restaurants awards. Food & Wine has called him “culinary Van Gogh”, while the New York Post coined him “the Willy Wonka of New York.” He was also named Business Insider’s “Most Innovative People Under 40”, one of Crain’s “40 under 40” and was bestowed the prestigious L’Ordre Du Mérite Agricole, France’s second highest honour.

The decorated chef participated at Taste of London for the first time this year. Considered as one of the highlights of the foodie calendar, the food festival attracted over 50,000 people to London’s Regent Park for an Al fresco summer feast.

A week prior to the five-day festival, Dominique Ansel Bakery along with Brigadiers, took 30 ballot-winning diners on a culinary journey on board a moving double-decker bus. Chef Dominique also gave attendees a sneak preview of it’s three bespoke flavors of Frozen S’mores specially created for the popular food festival. 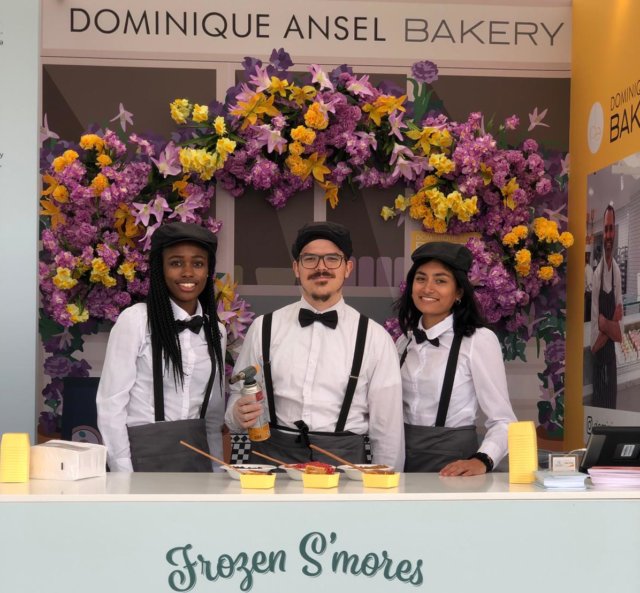 The first day of the festival saw Chef Dominique and seven other panellists judge a ‘Best in Taste’ competition featuring a dish from each of the Taste of London’s participating restaurants. The next day, Chef was on stage with Natalia Ribbe, from Ladies of Restaurants, participating in a talk about all things food.

The bakery also set up an exclusive one day pop-up shop featuring it’s three exclusive Frozen S’mores flavors: Banoffee, Strawberries & Cream and Blackcurrant & Elderflower. Considered one of the most popular dishes at the festival, the bakeries Frozen S’mores were featured in publications across the city including a live reporting by ITV’s ‘This Morning’.